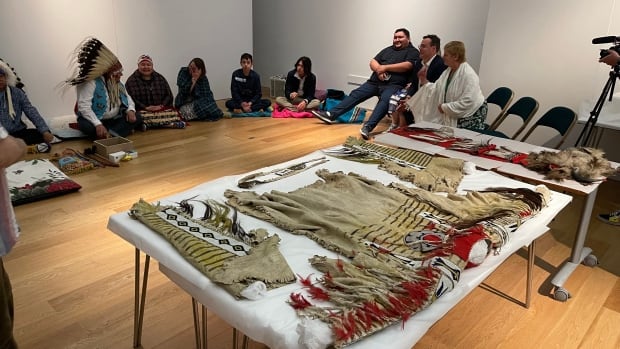 For Siksika Nation leader Uray Crawfoot, what his ancestor’s beaded T-shirt was like – legends found a century and a half ago in a museum in the English town of Done, less likely to finally be brought south this week. Alberta.

“Were they sold, stolen or donated?” All those things happened. “I do not know how it got here, I think it’s inappropriate,” Crawfott told CBC News after the ceremony. Museum of the Royal Albert Memorial in Exeter.

“They have to go back to the people who created these things.”

The repatriation ceremony, which featured traditional Blackfoot or Siksika heroic songs and colorful traditional headdresses, was the culmination of years of efforts to repatriate a collection of items belonging to the legendary chief Crowfoot.

“It’s a very emotional feeling that reminds me of life at the time,” said Jenny Goodin, a Siksika consultant.

“It is a great honor to be here, to remind me of Chief Crawfoot.”

Crowfoot, who died in 1890, is revered by his people as a powerful warrior, influential diplomat, statesman whose influence extends beyond southern Alberta and is felt throughout the continent.

One of his legacies is the 7th Treaty, which was signed between the “Crown” of Sotk.

Uray Crowfoot, 42, is his grandson, the current head of Siksika, who headed the delegation to Exeter.

“These items were never intended for museums, they were intended for all people,” Crawfoot told the Blackfoot delegation, which was joined by members of Exeter City Council.

“Before I saw it! [the Crowfoot collection] “With its rightful owners today, you do not really understand the significance of that,” said John Paul Hedge, director of the Exeter City Council, which manages the museum and has been involved in repatriation efforts for several years.

WATCH |: The Museum of Great Britain returned the sacred regalia to the first nation of Alberta.

After lobbying for their return, the first nation of Alberta received sacred regalia artifacts that once belonged to Chief Crawfoot from the Museum of Great Britain, where they have been on display for more than a century.

Exeter City Council voted more than two years ago to return Crowfoot’s collection, but the process was delayed due to COVID-19 սահմանափ travel restrictions, Hedge said.

“It’s not about what happened in the past. It is now about the relations of the city of Exeter with the nation of Siksika. “These are their things. We are glad to see them go to their rightful home.”

The most prominent piece of the Crowfoot collection is the beaded T-shirt, which is decorated with human hair locks and matching leggings.

There are bows, arrows, lead, pipes and other things.

They were all originally acquired by Crowfoot Cecil Dan, one of the co-authors of the 7th contract. It appears that he passed them on to a family member in England who displayed them in Exeter.

The museum officially bought the items from the family in 1904 for 10 10, which was too much at the time and still holds.

In the coming days, Crowfoot items will be carefully packaged and transported on a special charter flight to be returned to Calgary.

They are expected to arrive on May 25, f Blackfoot is planning a welcoming ceremony, as soon as the expensive cargo is cleared through customs և officially enters Alberta.

In addition, items will be displayed at the Blackfoot Crossing Historic Park outside Calgary.

Herman Deghin Parav, an elder from Siksika, a former cultural curator at the site, helped begin the repatriation process almost a decade ago, and was visibly moved during Thursday’s ceremony.

“I like to think that Canadians will be able to be properly educated, with evidence, to see the true history of our people,” he said, suggesting that repatriation would help the ongoing national reconciliation between Indigenous Canadians and Indigenous Canadians. wider society.

“Many of our children, grandchildren do not know our history, we are going to bring this house, we can share,” said the Yellow Old Woman.

In addition to meeting with staff at the Exeter Museum, the Siksika delegation also travels further to visit British museums where other Blackfoot items are kept.

Our CBC team met them at the Bristol Museum, where Yellow Old Woman explored some 19th-century deer or oak shirts.

“It simply came to our notice then [well]”, He said about the collection in Bristol.

“But in our homeland, we do not have such old collections in North America, they are long gone. So it’s amazing how well many of them are preserved, especially the shirts. ”

Uray Crawfoot, the current leader, said the next step would be to hold similar discussions with the Bristol Museum and another in Manchester to discuss future repatriations.

What will your employer’s abortion coverage look like? It is complicated.